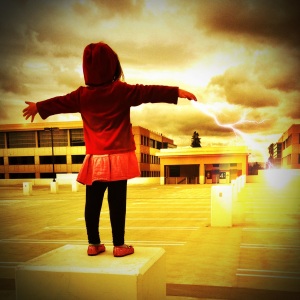 Some people have asked me how I edited this shot to make an innocent (well, maybe not *that* innocent) 4-yr old look like a recent graduate of Sorceress School, so here’s a quick tutorial:

So, lets start with the image. First, you want your kid larger than life so they look like an imposing figure. You’re going to have to either get down on your knees and shoot from a low angle — or in my case find an object/pedestal for them to stand on.

Another tip – if you shoot with your subject facing away from you, you’ll leave your shot open to more of a menacing interpretation. The scariest monsters are always those we can’t see.

(A cloudy day is also nice for mood – but since you can’t control that – don’t worry about it.)

Now that you have the shot to work with, bring it into Camera+ or your favorite cropping tool to get it square ready for IG: 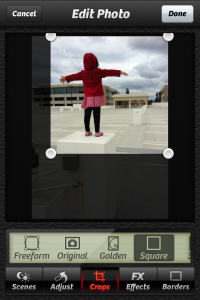 Next, apply the Clarity scene in Camera+. Normally I’m a bit reluctant to use this effect because it can take things over the top pretty quickly. But hey, that’s what we’re after in this shot, right? 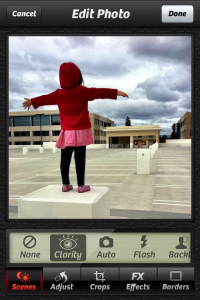 Clarity really helps the clouds pop, and also brings out some surreal texture in the red cape. Delicious!

Next, let’s add the Red Scale effect to enhance the other-worldly aspect of the shot. 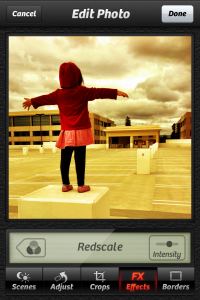 Look what that did to the shoes and the cape. Red, red and more red tones.Sweet – Our work is done here. Let’s save to our photo library and fire up our LensLight application.

LensLight’s interface is a bit wonky, so it takes some getting used to. It can be a bit tricky to pinch/spread and drag the effects to scale and position -but stick with it, and have patience and you’ll get the hang of it. 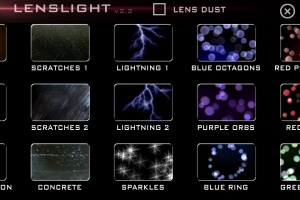 Let’s add the Lightning effect first. Rotate it into place using your thumb and index finger, and then scale it so that it connects your subject’s fingers to the target. (I left a touch of space between the fingers and the bolt – it just looked cooler to me) 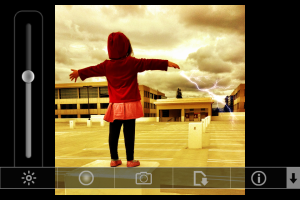 Now let’s save and “Render (add light) which will keep the lightning on your edit. 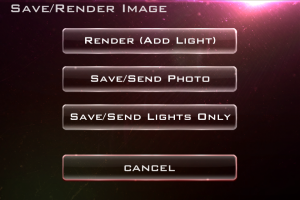 Now, to make our lightning strike a target with some impact, let’s drop a “Sun” onto the canvas. Boom! To amp up the glow a bit more, we’ll “Render” again, and add the “Chroma ring” effect. 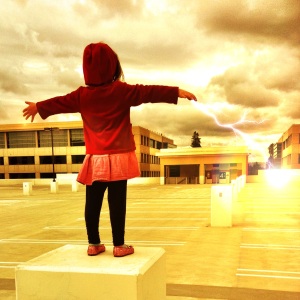 I would not want to be on the business-end of that bad boy!

Looking pretty good. Now we’re going to do some final touches to really bring it to life:

I’ve opened the shot in Photoforge, but FilterStorm and many other apps will allow you to do the following:

First, let’s take it up (or I guess “down”) a notch by adding some vignette. This is going to make our clouds more intense and also contrasty, as well as bring out the light that is beaming on the target. 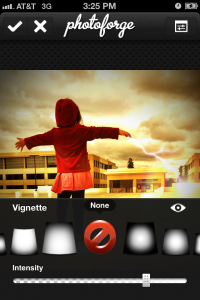 Finally, open the settings (the slider bars on the far left, bottom) and select Curves from the menu. (Looks like a grid with an “s” on it. 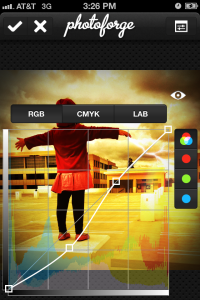 Don’t let this thing intimidate you. (The Curves feature, I mean. You should be very intimidated by this red hooded creature). Tap the white line to add 2 points roughly where I have. Then drag the one further down the line a bit below the diagonal. You will notice that this brings dark tones down considerably without mucking with your mid-tones or blowing out your highlights of the lightning, etc. 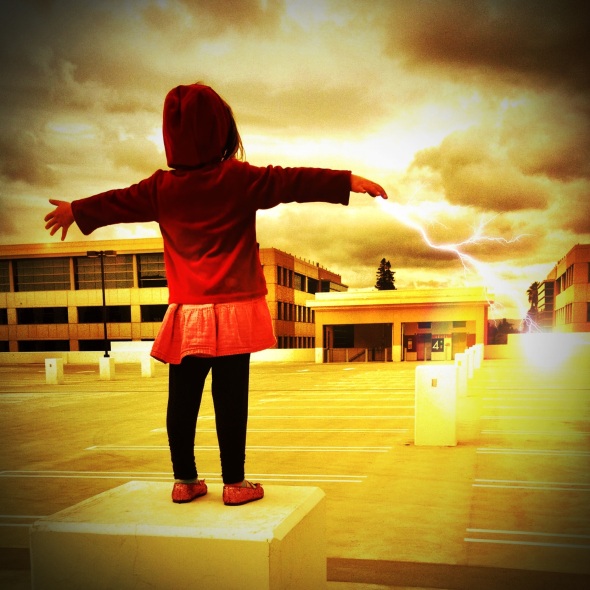