← Will your mobile photos stand the test of time?
How to build an image collage: Video Tutorial →

Diego Amador dreams of Electric Sheep. Scanning @diegobot‘s portfolio is like walking onto the set of a Ridley Scott film. His shots of Los Angeles architecture are moody, intense and awe-inspiring. Diego took time out of his busy schedule hunting replicants to chat with us:

When you’re not doing photography, you are…
Working like a mad man for the man , Editing photos, Fishing, or Hitting up the bars in L.A.

How did you originally get into photography? What was your first camera?
First camera was a Canon AE-1 [FILM] worked my way up to a compact digital camera to a Nikon DSLR.

When did you transition to shooting architecture?
When I noticed the works from photographer Joel Tjintjelaar. That guy does great B&W architect shots.

What do you think of the latest Instagram 2.0 release?
Think it needs a new update already lol. Sometimes uploading photos does fill in the photo & leaves a black line at the top or bottom. dig the new filters, but also unhappy with the controlling of tiltshift.

How would you describe your style in three words
Melodic.Symmetrical, and Spunky.

If your portfolio had a soundtrack, it would be.
Radiohead’s “Hail to the Thief. Only because every track is slightly different ,but in the end its the same style.

How many photos do you shoot on an average day?
Due to work 5-7photos .Tend to make up for it on the weekend.

What is a photo technique or rule that your regularly follow (or constantly break)?
I usually try to follow the rule of the thirds, but i tend to break that rule to throw in some side way angle type shots.

What’s the one iPhone photo app you can’t live without?
Darn just one lol  ok okay has to be Camera+ cant live without my clarity.

What else is in your camera bag?
Qbro,PhotoFx,Diptic,PhotoWizard,Picfx, and many many more.

What aspects of photography are challenging for you? What is it like shooting in L.A.?
Shooting people[candids] are tough for me.I feel i do a better job of shooting people with my own twist which usually means motion blur . Shooting in Los Angeles County is great. Angelinos have a great playground to play with. Although one small complaint is that L.A is so spread out so getting from place to another might take a while. Damn you L.A traffic!!

Pick one of your favorites from your portfolio and tell us the backstory. 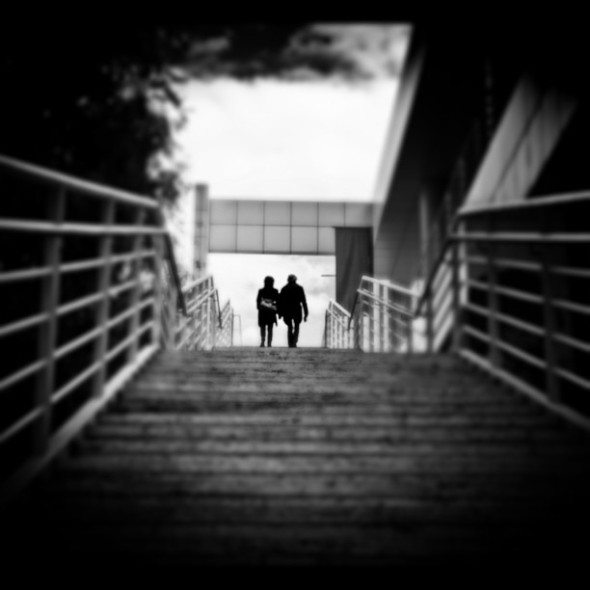 That would have to be “Love Personified’ Simply because the old couple in the photo. They gently walked up the stairs with a strong feeling of intimacy that could not be broken.

You shoot most of your photography in Los Angeles. If you could shoot any other locale in the world, where would it be, and why?
I would have to say Japan because they have awesome modern architect or any where in France for its rich historic background which cannot be duplicated.

If someone told you, “I want to take photos like @diegobot,” how would you respond? What tips would you give them if they wanted to emulate  your style?
Always look up and shoot away. You find interesting subjects by looking , and don’t be afraid to shoot new angles . Your neck might hurt after a month ,but its a ll well worth it.

Any other secret talents we should know about?
I can impersonate old people pretty darn good.

Any parting words for our nearly-departed friends at Kodak?
Sayonara!!!

Pick an IG’er with fewer than 500 followers that you think deserves a look from the community
@Deonizayus One of boys that I collaborate with from the #EliteCollab Movement we have going on. He can flip a toilet into Megatron if he wanted to. all on his phone. Talented fellow to say the least.